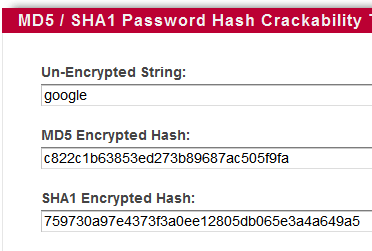 Web Applications like phpBB, WordPress, almost all online apps with authorization capability store user passwords by creating an encrypted hash of your password. The hash is unique to the password so hashing the password in the future will result in the same hash every time.

A hash is encrypted, meaning you can't reverse-engineer it to find the plain-text. So to crack a hash you have to create a hash for each guess until the hashes match, which tells you the plain-text of the encrypted password.

To speed up this process programmers have created pre-generated tables containing trillions of [plaintext=hash]. So you can quickly search a table for the encrypted hash, and if it finds a match it tells you the decrypted plaintext string.

I've put up a new tool to check the strength of your password hash, which you can use to see if one of your md5 or sha1 password hashes have already been cracked (meaning they are in the rainbow table), so you can be proactive in your security posture.

If you have a user account on forum software like phpBB, or really any web application that stores hashes in a database of some kind, you should find your hash and test it. If it is cracked then you should change your password to include both numbers, symbols, and letters at least 8 characters long.